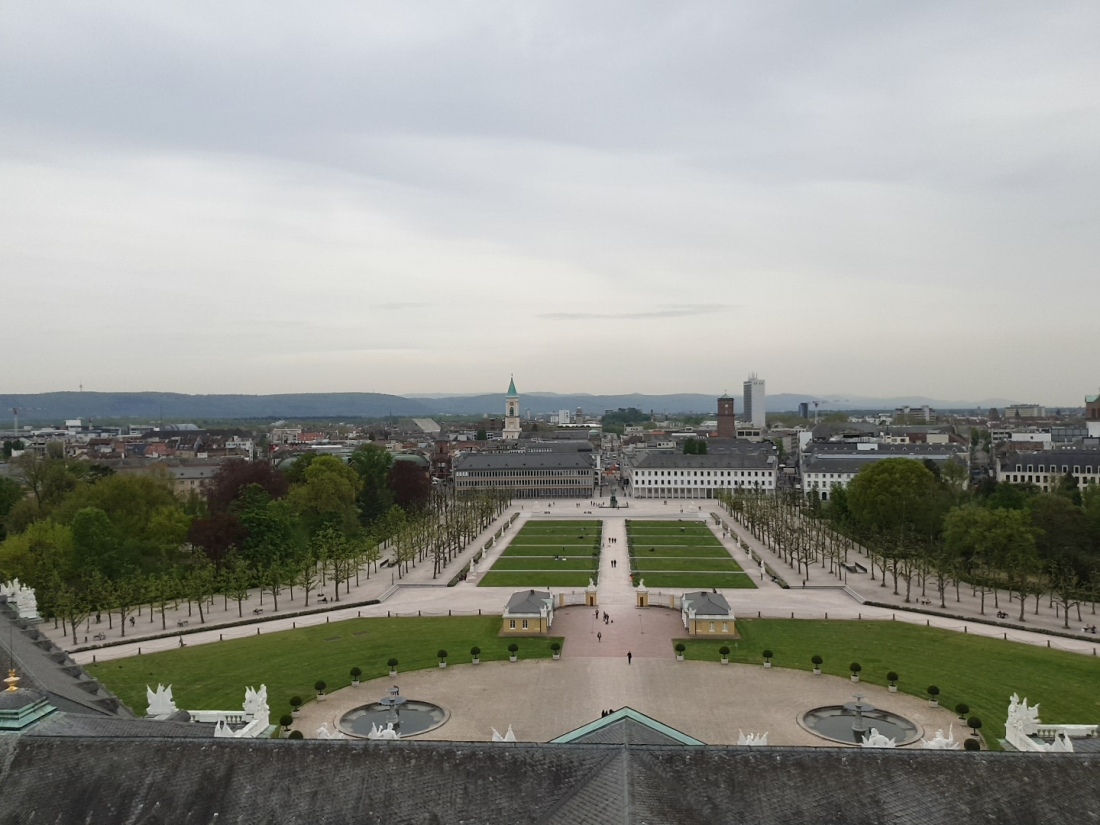 The modern city of Karlsruhe was founded in 1715 by Margrave Charles William and it translates to “Charles retreat”. The legend is that he build his new palace to find peace from his wife.

Although I stayed for a week in Karlsruhe I only had time to visit the city between the chess tournament rounds.

There is a big Zoo in Karlsruhe, next to the Congress center. It is particularly interesting for kids. They even have a polar bear and many exotic animals. You can interact with birds and some small monkeys. There is a cave full of bats where you can enter if you don’t mind leaving with a bat in your hair. One morning I won a game quickly and I spent a couple of hours walking in the Zoo garden.

In Karlsruhe there is a big gallery of paintings the State Art Gallery. Among the famous paintings displayed here are a nice Rembrandt self-portrait and some paintings by French impressionists as Monet, Cezanne, Degas, and Pissarro. The modern art gallery is located in the Orangery building near the main gallery.

I liked a painting by the expressionist painter Karl Hofer called “Self Portrait with Demons” from 1923. It has an interesting history. The painting was acquired by the State Art Gallery in 1923 but was returned to the painter in 1936 in exchange for another painting. The reason for this exchange was that the Nazi considered the painting “degenerate”. In 2018 the painting was acquired again by State Gallery and was displayed in the exposition 95 years later.

Another interesting painting was Otto Dix’s – “Seven Deadly Sins” created in 1933 when the author was fired from his teaching position at Dresden Academy. As in Karl Hofer’s case, his work was considered “degenerated” by the Nazi regime. This is an allegorical painting representing the political situation in Germany in 1933 when Hitler became chancellor. A funny observation is that Dix painted Hitler’s moustache only after the war as a precaution. Otto Dix’s paintings were influenced by the horrors he saw as a combatant in World War I.

Before hosting the Modern Art Gallery, the Orangery building was part of the Botanical Garden. Here in the XVIII and XIX centuries, they used to bring exotic plants to keep them from freezing during the winter. Karlsruhe has a rather small Botanical Garden located near the Palace.

I like the food in Germany and Karlsruhe made no exception. They have many traditional restaurants but also a large variety of international cuisine.

The last thing I visited in Karlsruhe was the palace where hopefully Karl found his “ruhe” (peace). The palace has a tower from where you can admire the entire city as in the picture below. In the palace, there is a kind of history museum similar to the History Museum in Berlin only smaller but still big enough for someone to spend three to four hours during a visit. For me, the experience was quite interesting and captivating. As a consequence, I almost lost the train to Frankfurt Airport that day. The museum is called Badisches Landesmuseum and as the name says has many items from local history but is not limited to that.

For a tourist Karlsruhe is an ideal place to stay if you want to visit the region. From here you can quickly reach to Heidelberg, Baden-Baden, Stuttgart, Strasbourg, Tubingen or Ulm.